In 1946, the first accessible motor-driven trike was invented by engineer Bert Greeves for his paralysed cousin, he went on to establish the Invacar company and by 1948, the British Government began a service where they supplied and repaired these motorised tricycles, giving them free of charge to those who were eligible. The cars were motorised trikes with a fibreglass shell designed for one person with space for a folded wheelchair. The government scheme, under the Ministry of Health, saw them as prosthetics, believing the role of the NHS as being there to get you mobile.

The scheme proved extremely popular and by the 1970's thousands of Invacars were on the roads, however, over the years it had become noticeably clear that these cars were not particularly safe. Disability campaigners fought to remove these vehicles from the road as not only were they felt to be dangerous, but they were 'antisocial' and did not meet the needs of people with a disability who had families. Lord Snowdon, with the help of the racing driver, Graham Hill did much to support the campaign – stating in Parliament in 1974 that he believed that the three-wheeler should be phased out in favour of a production car that could be adapted to suit the needs of any disabled driver. Across the country many protests took place for disabled people to have better support with mobility, however, the Invacars remained popular with many disabled drivers.

The Motor Industry Research Association crash tested an invalid tricycle back in 1974 and found that it failed the then minimum standards and in July 1976, the government announced that the vehicles would be phased out with the Mobility Allowance replacing it. This was a new cash benefit, introduced by the Government to allow recipients to choose the best way of meeting their mobility needs, whether driving a car, using taxis or getting a mobility scooter.

Getting the Invacars off the road was a lengthy process with the final government owned vehicles only being recalled and scrapped in 2000, 44 years after the scheme had been abandoned.

Billy reminisces about the Invacar

The Invacar (abbreviated from "invalid carriage") was a small single-seater microcar vehicle designed for use by disabled drivers, and distributed for free.

Billy reminisces
about the Invacar

Billy shares some fonder memories of his experiences with the Invacar.

"It wasn't Motability at that time it was…it was the government scheme around the trikes, and it was based in Astley Ainsley, with the garage for them down at Gorgie Road. They came out and they measured the distance between my house, which was at top end of the village, to the garage at the other end of the village, and said if I could walk that distance I didn't need a car. So again, in came Mr Dalziel 'William needs a car', so I was tested, sent to Astley Ainsley hospital in Edinburgh and they put me in this vehicle, gave me three hours training around the hospital grounds…I passed that, they handed me the keys and says 'right on you go' 'on you go where?' I says 'take it back home?' I says 'after three hours?' So I had to drive this monster from there all the way back to Bathgate, then Torphichen."

"I mean it was like a motorbike and you had throttle here, gear shift here, which was neutral, reverse and forward and that was it, and a 500 flat twin cylinder engine. Everybody thought 'oh, it only goes at 30 mile an hour' it didn't! It's maximum speed was 70! So everybody, when you came to a T-junction and you were coming out, somebody would always screaming past you, cause they thought 'plenty time it's only a disabled car'...I managed to get myself through the streets of Edinburgh and I was terrified! Because your steering, like this like a motorbike, and to break it you had to push down on the lever, you had indicators here [points] There was no heater, no radio, no insulation of any kind and it was so light that, my own brother could easily lift the whole car to shoulder length, at the front, it was so light, made of fibreglass. It was a heap, and I managed to get it home, by that time I was working in Peffermill (Blindcraft) but I was so afraid, what I'd do is I'd take it to Bathgate, park it in Bathgate, and get the bus to Edinburgh, from Bathgate. I was too terrified to take it into the city"

"They were too centralised, steering was too centralised, they were too light, you had no heating, no radio, no nothing, no passengers...I mean I got caught taking passengers, but I think there were so many in the car that the procurator fiscal threw it out. I was going to a party and I got caught with about 5 people in the car, 5 people in that dinky wee...they were stretched over the back of me, they were sitting at either side of me…and I was in the middle steering! [laughs]. The police…they thought it was amusing to be honest, but they did lay charges before the procurator fiscal!"

"It was a killer that car, it really was, it was a killer. Even Graham Hill, the racing driver, he said exactly the same thing he took one round Brands Hatch for Lord Snowdon and…he said it was "terrible, terrifying". He and Lord Snowdon had campaigned to get rid of these awful cars, because they really were awful. As I said I have lost friends....he was in a car smash and his car exploded, another lad, his brother went around the corner right up the back of an artic, and his brother was sitting in an orange crate, at the side of him. There was only one seat in the car and of course, they were both killed…it was quite sad."

In Edinburgh we used to go in convoys of those things [laughs] those wee cars, blocking roads and…way back in the seventies, that was scary enough because traffic then would either breakdown or, we had one was hit wi a car, oh god it was a nightmare but it was basically to tell people that they were seriously stupid, why do you give the piece of junk to somebody who's already got a disability…it was a death trap!"

"We'd drive up to the Scottish office, or we would go down to different places, I remember driving up and signs hanging out the window and stuff like that, there was a lot, there was hundreds of us, we were all in the same boat, we were all different kinds, but it was actually Lord Snowdon and his efforts to change the law that had it removed, I don't think the government cared.

"I was young and I did enjoy what I did, that wee three wheeler for instance. I was stupid enough to put flexible aerials on it and put a radio on it, and I cross wired it and it melted, it cut right through it like a cheese wire [laughs] It was only a wee box, it was like a glove box at the back of the seat, wasn't room for anything else and I used a red hot poker to make the holes in the back of the car to fit the aerials in, unbelievable!"

"If you'd ever got the chance to drive one, you would soon know, it was horrifying, especially in bad weather. I remember, worst I got was, you know where the Halls is?... I was on my way to Edinburgh, driving along, this lorry came, shooting past me and it was really bad roads, and the slipstream sucked me right up behind him. I couldn't get out because all the other cars had left 2 tracks on the road and there was this one track in the middle where the snow had splashed, right, and my front wheel was stuck in it, so where it went, I went! Of course, because the lorry was going so fast he was pulling me along with him, I went into a skid, went right round like this [motions with hands] my back wheel hit the kerb and I rolled up the kerb and the roof just caved in on me and the back window wrapped round my head like a book [laughs]. I had to walk into Broxburn and got to the police station there and said 'excuse me I'm sorry but I've erm, want to report an accident, 'what kind of accident?' 'well I've wrecked my Invalid carriage...it's on the grass outside Halls'. They didn't care." 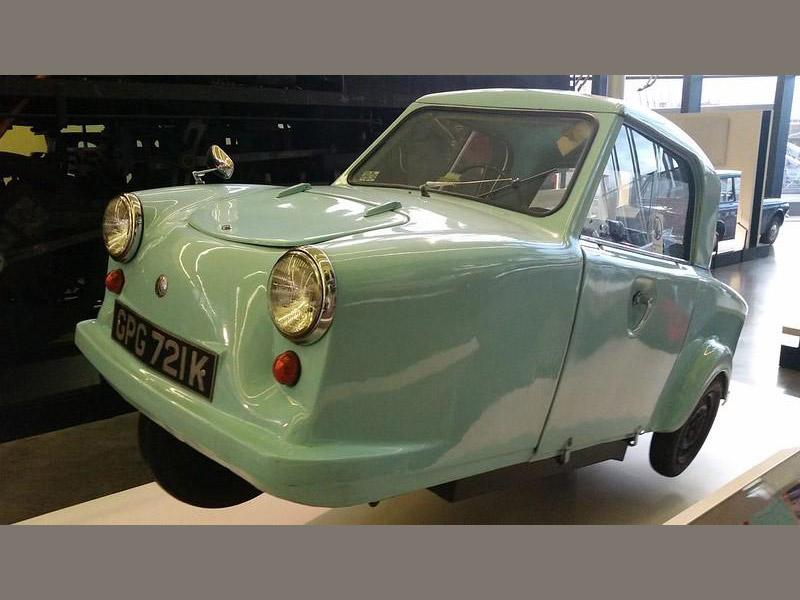 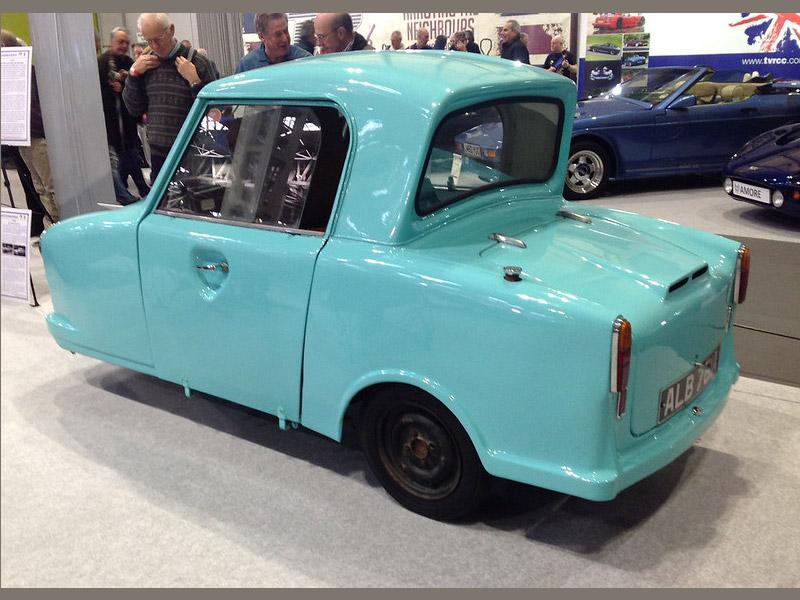 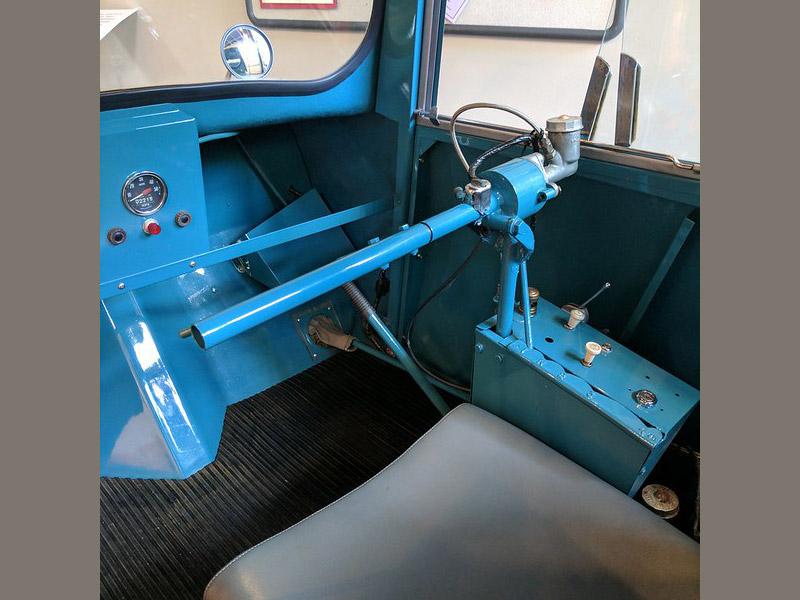 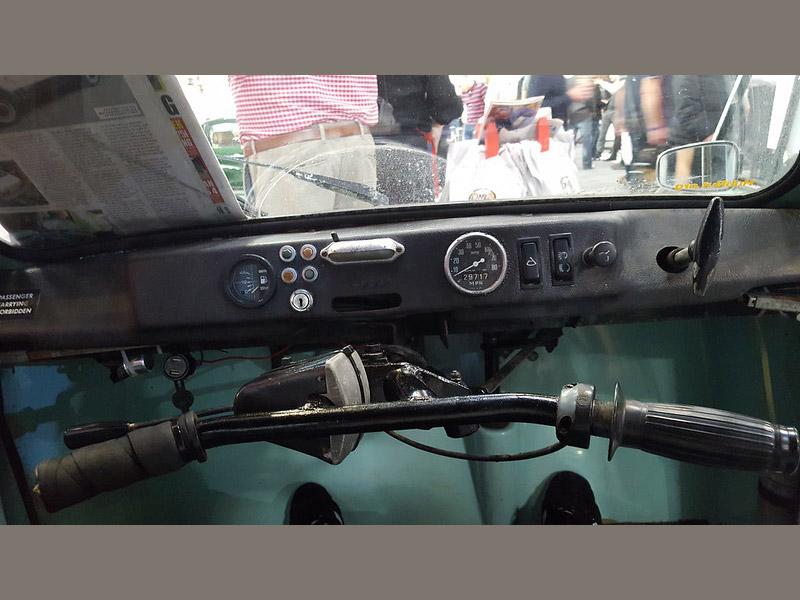 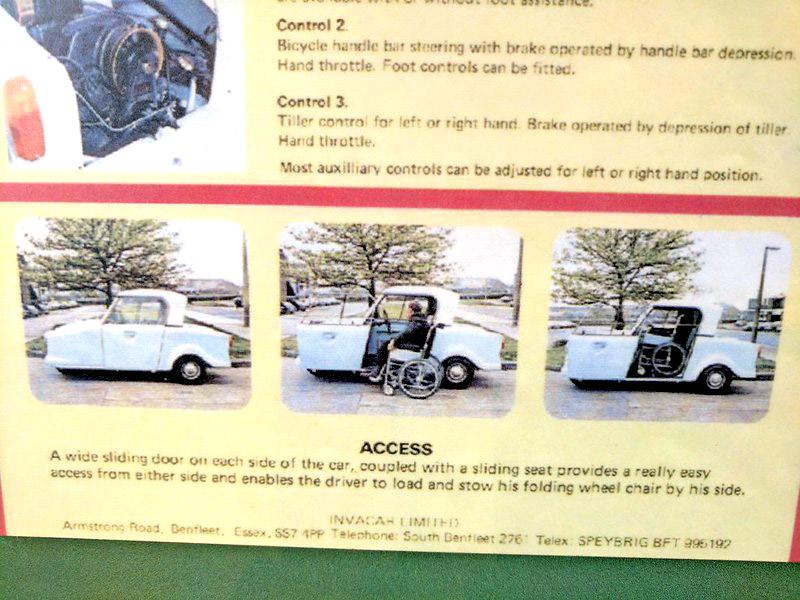 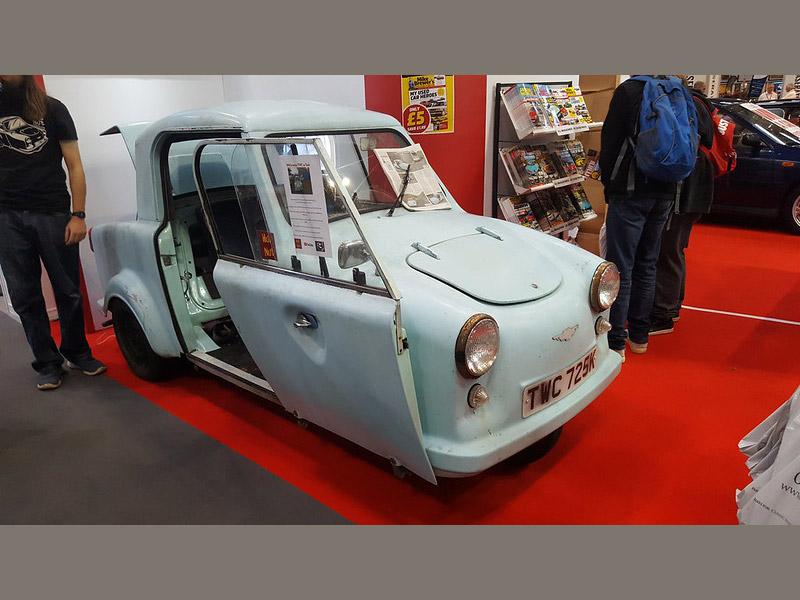 A.C. Invacar (1963) flickr photo by andreboeni shared under a Creative Commons (BY) license

A.C. Invacar (1963) flickr photo by andreboeni shared under a Creative Commons (BY) license