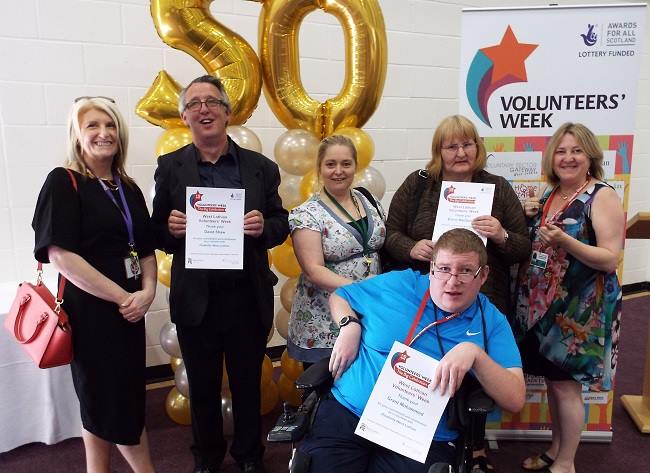 Disability West Lothian was established in 1976 as the West Lothian Voluntary Council for Disabled People, run by members who themselves had a disability, to highlight the needs of people with a disability within the county and to work to ensure disabled people can participate fully as equal citizens by emphasising that disability is not with the individual but with the social and physical environment in which that person operates.

By 1988, the organisation had become a registered charity with premises in Bathgate and a small team of staff and volunteers as well as a minibus which was acquired to help with the access issues faced by local disability and voluntary groups. In 2000, the organisation moved into the newly built Ability Centre in Livingston which also served as a base for their council funded disability information and advice service.

Over the years they went on to establish many projects and campaigns to break down barriers and facilitate access for people with a disability within West Lothian, some of these projects included Worklink – Scotland's first integrated Training and Employment Unit for people with a disability, Polbeth Market Garden – a project which trained young people with learning disabilities in gardening as well as personal and life skills. Disability Equality Scheme – developed in partnership with the Council, Mental Health Advocacy and Ace Advocacy.

Jargonbusters – a user led group to work with local organisations and businesses in the creation of accessible information and a Living Book Project – a project run along with Mental Health Options for Older People (MOODS) to introduce the elderly and people with a disability to the internet.

Disability West Lothian staff and members were also proactive in ensuring the needs of people with a disability were highlighted when creating local legislation or undertaking community development projects. This included having a presence on local disability forums, consulting on the development of public buildings and services and creating many 'Have Your Say' events over the years.

Many community projects, across West Lothian benefited from the Access Fund.

Its activities are based on the belief that the needs of people with disabilities, older people and carers of young children should be considered as an integral part of the design process...

Throughout the 80s and 90s more opportunities were becoming available and access to local groups and facilities were increasing for people with a disability within their communities. The West Lothian Access Committee was providing grants to assist local businesses and organisations to become more accessible and encouraging good access practice through their awards scheme.

Its activities are based on the belief that the needs of people with disabilities, older people and carers of young children should be considered as an integral part of the design process and that by meeting these needs, buildings and services will perform better for all users. The majority of members of the Access Committee are individuals with direct experience of disability, who work closely with West Lothian Council officials along with other agencies to achieve equal access for all.

The Access Committee has been involved in a wide range of local projects:

History on disability locally and nationally

In West Lothian, the County Council Welfare Committee organised a number of 'Help the Disabled' weeks throughout the sixties to "bring to the notice the services being provided to disabled people and at the same time authorities may learn of the people in need of these services". Although this brought more awareness to the needs of people with a disability at this time– the impression was still of a segregated group who needed help.

"I always needed to…have accessibility for toilet facilities…but because you don't advertise that disability, nobody knows your needing things like that"

In 1970, Alf Morris, who went on to become the first Minister for the Disabled, saw the introduction of what became known as the 'Magna Carta' of disability legislation – the 1970 Chronically Sick & Disabled Persons Act where local authorities were given responsibility for welfare services and housing extending to providing practical assistance for people in their own homes, organising the provision of meals for people at home or within day centres, and the adaptation of houses to meet people's needs.

In the first decade of the act, members of the Post Office Engineering Union installed 70,000 telephone lines in their spare time for a nominal charge which was then donated to disability charities.

The Act also gave people with disabilities the right to equal access, recreational and educational facilities and this included helping with travel which was all to be provided by local authorities. 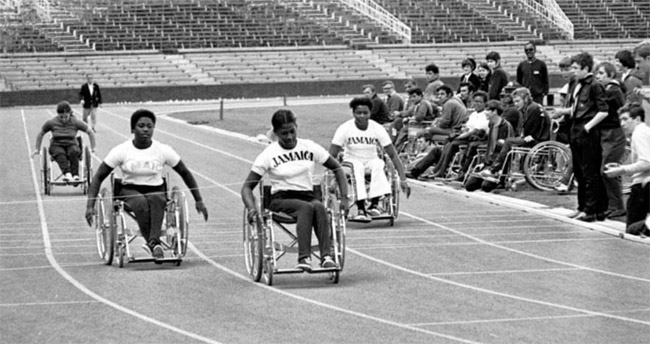 In the same year, Edinburgh was to host the 1970 Commonwealth Paraplegic Games and a number of West Lothian athletes took part which led to an upsurge of interest in sports for people with a disability in the county.

Wheelchair competitors take part in an unidentified track event at the Paraplegic Games in Edinburgh in July 1970.

"I remember 'the Year of the Disabled', that was 1981. That was the first time disability was focussed on TV and the media."

The 1980s began to see a shift in attitudes towards disability and the United Nations named 1981 the International Year of Disabled People, with its main theme being 'full participation and equality'. This was the first major event to place disability issues into a global context and numerous British organisations involved with disability, benefited enormously from grants and media attention for the first time.

In 1981 stamps were issued featuring illustrations by Elizabeth Twistington Higgins MBE, a former ballet dancer who became totally paralysed due to poliomyelitis in 1953. She was a member of the Mouth and Foot Painting Artists Association and became an internationally famous mouth painter who was awarded the MBE for her work.

In 1983, Livingston and District Council on Disability thought it would be in everybody's interest to have a 'fairly accurate measure of the extent of disability in the district and considered that a survey should be undertaken'. The Livingston Access Survey wanted to provide impetus to enable local action in the community and also to provide a database establishing the need for employment opportunities for people with a disability within West Lothian.

The completed report contained a wealth of information and statistical analysis of the incidence of disability in the district as well as the needs of people with a disability in respect of the services that were available to them from statutory and voluntary organisations and agencies operating within the area. At this time, this survey was ground-breaking and provided huge insight and led to the formation of the Livingston Council on Disability's Disabled Persons Project which aimed to consult with the appropriate organisations to work to provide more informed, co-ordinated and integrated services within the area for people with a disability. Every household in Livingston district received a letter and survey, followed up by a visit from a project team member.

In 1983, the council along with the help of the Manpower Services Commission published the Livingston Access Survey. This was a huge step towards accessibility within the county and only a few years later the West Lothian Access Committee was formed to work with local groups and organisations to remove physical and attitudinal barriers to equality, and to promote all aspects of independent living within West Lothian.

The 1990s saw many more people with disabilities become more involved in fighting for better access within their communities and organisations around Britain such as DAN (Direct Action Network) who demonstrated against inaccessible public transport and buildings.

Disability rights activists came together on both a national and local level looking for a response to the physical and social barriers that existed within their communities. National disability activist groups such as the Union of the Physically Impaired Against Segregation (UPIAS) and the Disability Alliance were formed as were many on a local level including the Area 5 Action Group which went on to become The Action Group. 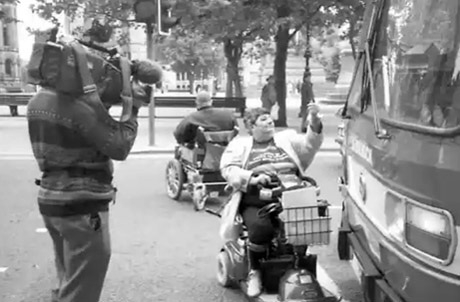 The Action Group were involved in numerous campaigns in Scotland to improve services for people with a learning disability including a campaign for the closure of institutions such as Gogarburn Hospital.

Local Councils were increasingly recognising the importance of people with a disability having an input into the running of community facilities, services and the creation of local legislation and as such disability forums were being called upon to share their views and ideas.

In 1997, West Lothian Council held a "Have Your Say Day" at the Howden Park Centre to encourage people to share their views about how community care services are planned, which contributed to the council's West Lothian Community Plan. These types of events were to continue over the years with many disability groups and forums shaping decisions that were being made in community planning.

The millennium saw even more inclusion for people with a disability to take part in sport with 32 West Lothian Athletes taking part in the Special Olympics UK national games - bringing home a total of 45 medals. The 1990s saw a more community involvement for people with hidden disabilities such as cinemas and supermarkets having more autism friendly environments and the launch of an annual Mental Health Day at the Strathbrock Partnership Centre, which opened in 2002. Strathbrock was the first of its kind in Scotland offering council, health and community facilities under one roof, which included a mental health day centre and Café Mistura which is operated by Capability Scotland as a training café for adults with a learning disability and was open to the public.

In 1992, West Lothian Council made available an Access Fund for organisations to make changes and improvements and the Access Committee continued to advise and support on accessibility to the built environment as well as launching a series of good practice awards for local businesses and organisations.

The Disability Discrimination Act (1995) brought about major reform concerning the nature of accessibility as it placed a duty on landlords, businesses, and property owners to take measures to make their buildings accessible for all.

The 2000s saw a major shift in building and planning attitudes and the idea of 'universal design' emerged which believed that instead of adding special facilities to a 'normal' building – they should be designed to ensure that any person with any disability could use every part of the building. West Lothian saw the construction of such places including the Ability Centre in Carmondean and Quigley House in Craigshill.

The Ability Centre in Carmondean, Livingston was purpose-built to accommodate a range of services for adults with a physical disability. The building, opened in 2001 by quadruple amputee mountaineer Jamie Andrew, provided a spacious, bright and accessible environment for several services and organisations who were based there including Disability West Lothian, West Lothian Community Rehabilitation and Brain Injury Service (CRABIS). The Sensory Resource Centre and Livingston North Housing Office. The large double-height building was also home to a social café, library, and served as a base for many local community groups. 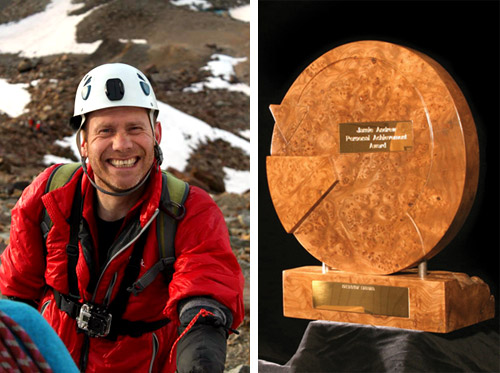 In 2002 it was awarded a charter mark in recognition of excellence in public service and two years later it hosted the first Jamie Andrew Award ceremony. These awards included 'Achievement of the Year' to recognise the contribution to their community made by people with a disability in West Lothian and also the 'Good Access Award' which were presented to local businesses and organisations whose products or services were accessible by all.